Some LNA tests for HRIT/LRIT 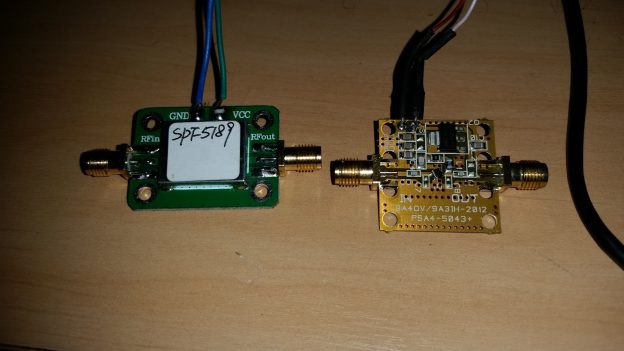 So I was talking with @luigi on OSP RocketChat and he noticed that one of the LNA’s I suggested alogn with the LNA4ALL (the SPF5189) got a comment on ebay saying that it doesn’t work on L Band.

So that was weird to me, since I have 5 of them, and one currently in use with my GOES setup. So I decided to do a small and crude benchmark for L Band comparing no LNA with LNA4ALL and SPF5189.

So the test I wanted to do was pretty simple: check how the LNAs was effective over LRIT/HRIT band (L Band at 1.7GHz). Both LNA4ALL and SPF5189 works better for lower frequencies (like said by jlxsolutionsinc, VHF/UHF) but they also perform (according to datasheet) really well on L Band. So I made a very simple setup here. Since I already had a very good HRIT signal (1694.1MHz, about 1MHz BW, 10dB SNR) I decided to get a 24dB Attenuator to try to reduce the signal and simulate a low signal environment. Not sure if that’s the ideal test, but it would give a good estimate of how it would work.

So there would be three scenarios:

I found that with 24dB attenuator the signal just vanished with 0dB LNA gain on the airspy, so I cranked up a bit so it would appear as a weak signal so it would have a best comparison. I found that 4dB was good so here is the GQRX screenshot for the Airspy directly on the output of attenuator:

So by just analyzing these three pictures I can get some conclusions:

Some details worth mention:

I hope that helps understanding that the SPF5189 does work on L Band and its a cheap alternative for someone who might want few LNAs for LRIT/HRIT setup. Of course this test is not  the best test that could be done with the LNAs but this gives an idea how it performs on L Band.

For those who want to buy:

For those that are in Brazil and are curious about: I bought two times with Adam and one on eBay. None of them got taxes. The way Adam send is safe, but keep in mind that Brazilian Customs can always apply taxes to stuff.