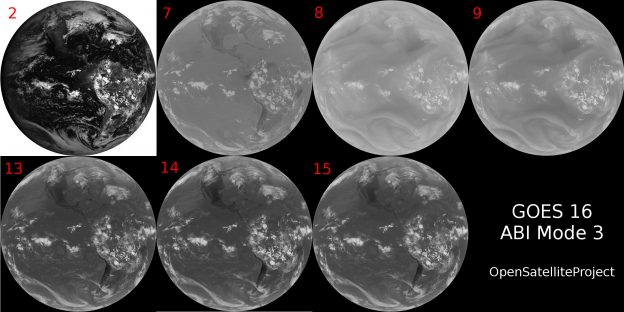 In the week from March 27th to 31 NOAA performed some new downstream tests over HRIT link on GOES-16. The idea was to transfer some CMI (Cloud and Moisture Imaging) products and see if the software developers and current stations could receive it fine. Before starting talking about that, please notice that all data sent so far is stated as test data and should not be used for any real world measurements. As NOAA states (and I forwarded on my last post):

The user of that link assumes all risks related to the use of their data and NOAA disclaims and any and all warranties, whether express or implied, including (without limitation) any implied warranties of merchantability or fitness for a particular purpose.

So I kept my dish pointed to GOES-16 all over the week and did record the Monday testing (that contained CMI images) and recorded all files sent all over the week. Some of them are automatically posted on Twitter / Instagram by my OSP Bot but not all of them. I had discovered some issues with my Virtual Channel Ingestor on GOES Dump, and also most of the new data was not being handled correctly by Goes Dump. Working together with @usa_satcom we managed to almost zero-out the bugs in GOES Dump.

The CMI Images were sent using LRIT Rice Compression (Goloumb Rice, same as NetCDF and older GOES satellites uses), so no need to change OpenSatelliteProject algorithms to a new compression, but they changed compression parameters. Since it was hard coded on GOES Dump, all CMI images went corrupt. Luckily I recorded the Virtual Channel Input on GOES Dump, so I could replay everything again. For anyone who might want to try it, here is the virtual channel input for replaying. Each Virtual Channel has 892 bytes, please refer to XRITLibraryTest for more information.

Besides that, they also sent the entire full disk in a single segment. I do prefer this way but it might be a problem for users that has a small dish (like the recommended 1m) that might get easily out-of-signal for sun outages or similar interference. To be honest I’m not sure if the image is useful for a general weather user if a segment is corrupted and the Full Disk isn’t received correctly. Regardless, I suggested to NOAA that if they plan to keep the recommendation of 1m dish for HRIT ( which works fine ), they are probably better going for segmented images to avoid losing an entire image because a small part getting corrupted.

The full disk images also came cropped and in the right aspect (the G13/15 sensor had an aspect ratio of about 1:2 in height : width, so it had to scale to be square), that’s really nice. Also since the ABI resolution is higher (about 4 times) they could make a nice square pixel, which means you have same resolution ( km / px ) in vertical and horizontal. The resolution from the HRIT images is a bit higher than older satellites (2km vs 2.2km), but its far from the full ABI resolution (HRIT can’t download it). Here is an example of one of the Visible (channel 2) channels:

After some changes on GOES Dump, I was able to map the channels to create False Color Images for GOES-16 as well (using the same algorithm I use for G13/15). That’s one of them:

For those who want to know how will be EMWIN on HRIT, they also sent some EMWIN data Monday. On GOES 13/15 it was a very specific Virtual Channel ( 0 to be exact ) that just encapsulate the transport stream of EMWIN channel ( the data that are sent over EMWIN downlink ). But on GOES-16 they’re just sent as the other files. That’s nice because the older EMWIN transport is very buggy over LRIT link. Here are some examples of data that came from the tests.

To be honest there is not much to talk about the testing itself. NOAA is doing a pretty hard work to setup the new generation softwares that will produce the outputs for the end users over HRIT. There is a entire year of testing as the GOES-16 is expected to go operational in the start of next year. Still, even on tests the products looks amazing. So far Open Satellite Project is compatible with all data they sent so far. I will be checking for any new data that they sent (they also send me an email when they’re going to test new stuff).

And just to finish my post, here is an animation of Channel 7 from GOES-16 ABI!